Thoughts about what computers can, what they can’t and whether or not the robots might throw us humans out with the bathing water.

A computer is a piece of technology for “using scientific knowledge and technical aids for practical purposes, eg for solving certain production and work tasks” faster, easier or with fewer errors than if people had to solve the tasks themselves.

When humans and computers solve tasks in the same way

it is called “computational thinking” what we do. It goes like this:

Computers are unmatched in the power of computing because all the computing power available is put into solving the designated task.

because even the most well-defined task may need more computing power than what the computers have available. 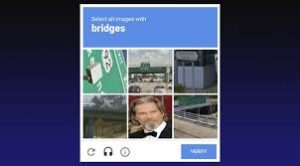 Another example, we humans can quickly identify which of the six photos show a bridge. A computer can not pass the CAPTCHA test, i.e. the “I am not a robot” test, because computers can not ‘recognize’ bridges, but must analyze all the pixels and compare with what the computer ‘knows’ about how things look.

It is, of course, captivating to mention Heisenberg’s uncertainty principle, Gödel’s incompleteness theorem and “messy”, “wicket problems” as reasons why not everything can be computed. But I will tame myself, because I have no clue what that is about, other than that it’s supposedly some of the good reasons why computers can neither understand nor solve human problems without common sense. So it’s actually quite simple: When we humans act, it is because we are motivated to act. When computers act, it is because the programmer and the user have asked for it and power has been turned on.

Above all, it is us humans who experience and define what problems are, who the problems are problems for and how we ‘best’ solve them. We do this on the foundation of our values from the intersection between virtue, duty and utility. We define which problems have value for us to solve and which tasks are needed to solve the problems sensibly and appropriately.

In addition to being ethical herd animals, we have some strengths where computers can not yet match us in solving tasks:

Computers are technology and technology are human tools. Like tractors, pencils, and fire are tools for solving very specific tasks. We know the fire to be “a good servant, but a cruel lord“. This is also the case with all other tools we use to solve tasks for us and even though the usefulness of tractors / pencils / fire is extremely limited, we probably would rather not do without them.

Personally, I think it will take a while before we become obsolete because of our own technology 🙂

What are your thoughts?